Aqua submersible watercraft, a sports car above and below the surface 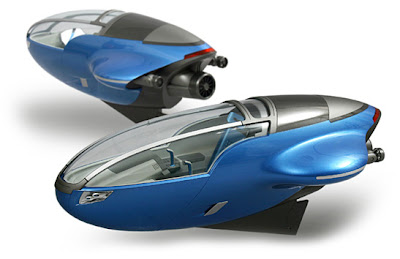 Korean designers Sungchul Yang and Woonghee Han think we’re going to be living in waterworld some day soon, so that’s why they put together Aqua. It’s a design concept for a versatile little one-person runabout, equally at home skimming along the water's surface or plunging deep beneath the waves.
The dolphin-shaped design was nifty enough to win a 2008 Silver Idea Design Award, so the two University of Seoul student designers must be doing something right. It’s not mentioned how the sub will be powered, but let’s hope we will have learned how to make an electric-powered sub go super-fast and far by the time something like this might be built.
BusinessWeek, via Gizmo Watch
at 7/21/2008 12:09:00 PM
Tags: cars, Future