CityEl, the 200mph electric car zips along a monorail 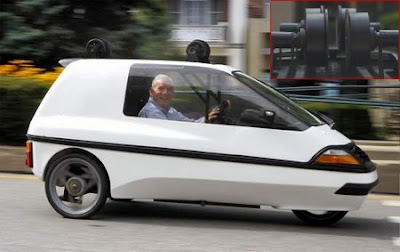 Braggadocio about electric car designs runs rampant, but the CityEl’s claim of 200mph beats all. This working prototype was built for a mere $2500, and spends most of its life as an ultralight 3-wheeled electric runabout. But if its inventors Jay Andress and Andy Webster can raise $10 million, they’re going to create a one-mile test monorail that hooks up to those wheels on the car’s roof.
While riding the electric rails, the car can accelerate to 200mph, and charge its batteries as it goes. All the while, the driver can relax and leave the driving to the computers and rails. Then, once the monorail section of the trip gets the car close to its destination, it can drive the rest of the way under its own freshly charged electric power.
The biggest catch is building the $500 billion worth of rails to accommodate a country full of such vehicles riding along the corridors of Interstate highways. But its developers say the system could pay for itself in energy savings in a year.
MonoMobile, via Autobloggreen
at 7/14/2008 09:50:00 PM
Tags: electric cars