The competitiveness of automobiles is being more and more being determined by electronic devices. Auto makers are adding new functions one after another. Some component manufacturers have formed teams dedicated to exploring the appearance of cars in the future. Under an increasing burden, the development segments are implementing cross-sectional reorganization to increase efficiency as quickly as possible. Meanwhile, manufacturers in Europe have started to use India, which holds an abundant resource of engineers for software development.

Toyota Motor Corp fully redesigned its "Crown" in February 2008. The sedan features the superior driving performance resulting from its higher electronic control, although the platform has not been changed from the predecessor Crown. Each new model is equipped with a "VDIM" integrated management system that enables stable driving even on corners and on rough roads by coordinating and controlling the steering, brakes and the engine.

According to Toyota, a driver of the previous model who tried driving the new Crown said, "I'm surprised that driving performance can be improved so much despite the same hardware as before." 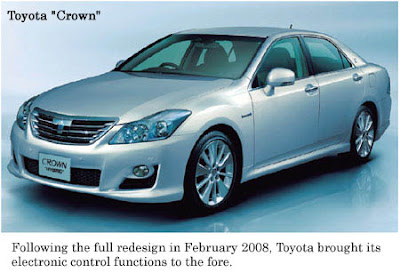 The new Crown's catalog represented its focus on electronic devices as well. Toyota used the term of "electronic platform (PF)" for the first time in its catalog.

"It's difficult to appeal to drivers that the car has been redesigned although its engine and suspension technology are unchanged from the existing model. We wanted to express the Crown has realized many electronic control functions thanks to its enhanced electronic PF performance," said Shinji Kishida, project manager at the Product Development Group of Toyota.

The new Crown's electronic functions include, other than VDIM, the transmission linked with the car navigation system, a monitor system to prevent drowsy driving, a sensor system to detect pedestrians at night, a signal system that warns vehicles behind when the brakes are suddenly depressed by flashing rear ramps, and more.

Orders for the new Crown grew more than four times the company's target to 24,000 units in a month after its market debut, representing that Toyota's strategy of enhancing electronic devices has been accepted by drivers.

Kenji Ohishi, senior manager of the IT and ITS Engineering Department in the Technology Development Division at Nissan Motor Co Ltd, expressed the recent trends of applying electronics to more automotive functions as "Electronic control has come to the forefront."

What changed the situation was the "Fuga" luxury sedan that Nissan partly refined in December 2007. The Fuga employed a function to link the car navigation system with its brakes for the first time in the industry. Specifically, the system reads the curve ratio based on map data of the car navigation system and slows down the Fuga by automatically applying brakes before the curve.

"The link between the car navigation system and the automotive control made it easier for drivers to realize merits of the electronic control," Ohishi said. 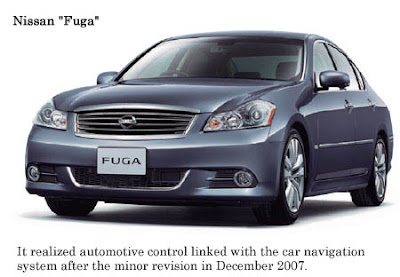 Honda's new "Motion Adaptive EPS" technology controls both ESC (electric stability control) and EPS (electric power steering) functions and stabilizes driving through braking of each wheel and EPS when the steering becomes unstable during cornering or on slippery roads.

If the driver's steering differs from the direction that the system judges as desirable, the technology adds a reaction force to the steering using the EPS motor and prompts the driver to steer in the correct direction. Toyota's VDIM also realized similar functions. 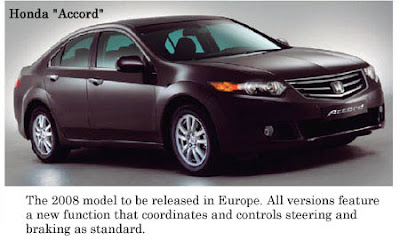 The "Legacy," which Fuji Heavy Industries Ltd (FHI) partly revised in May 2008, features the new "EyeSight" drive assist system that uses a three-dimensional stereo camera. It is a pre-crash safety system that automatically activates the brake system if there is an imminent danger of a collision according to its computations based on the image recognition of objects ahead using the stereo camera. 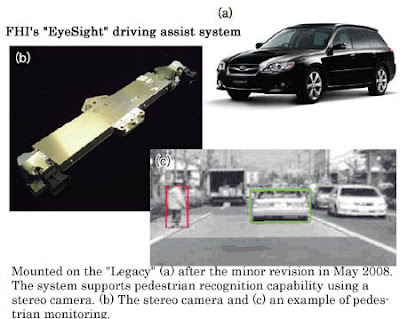 The ADA, the EyeSight's predecessor system, recognized vehicles ahead using both stereo camera and milliwave radar technologies. The ADA, however, only supported a front vehicle tracking function, not a pre-crush safety system, although it was a pricey system. As drivers did not consider the function was as worthy as its cost, they did not appreciate the ADA.

"This time, we placed emphasis on functions that are helpful for drivers, instead of focusing on our technology first," said Eiji Shibata, staff manager of the 3rd Vehicle Research & Experiment Dept in the Subaru Engineering Division at FHI.

Not only minimizing the number of accidents through the pedestrian detection capability using a stereo camera system, the new Legacy also features the industry's first function to reduce damage due to false starts when parking.

If the system detects a wall in front of the car through the stereo camera, it will close the throttle to minimize the damage resulting from a collision even if the driver depresses the acceleration pedal. FHI realized the function just by adding software.
at 7/03/2008 02:57:00 AM
Tags: Car News, electric cars