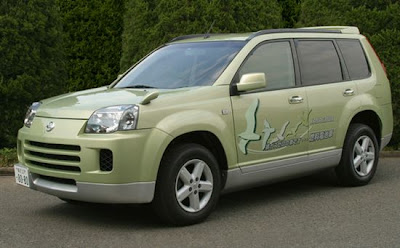 Delivering plenty of clean power without noxious emissions, the X-TRAIL FCV from Nissan is high-pressure hydrogen-powered fuel cell vehicle for the masses. The vehicle was developed in line with the “Nissan Green Program 2005,” a mid-term environmental action plan outlining the company’s efforts in technology development, recycling strategy and many other initiatives and forms a major part of Nissan’s plan to be carbon neutral by 2010.
The 4th generation of Nissan’s hydrogen-powered car, the X-TRAIL FCV boasts of a top speed of 150Km per hour with a range of over 311 miles and goes from 0-100Km per hour in less than 15 seconds while emitting pure water from its exhaust.
The high-power electric motor comes in at 90 kW or 1.7 times that of its 2002 predecessor and receives its power from a Compact Lithium-ion Battery, featuring a thin, laminated cell, which has half the weight and volume of a conventional battery, yet 1.5 times the output. The pricing for the beast is yet to be announced though you can see it in action below.