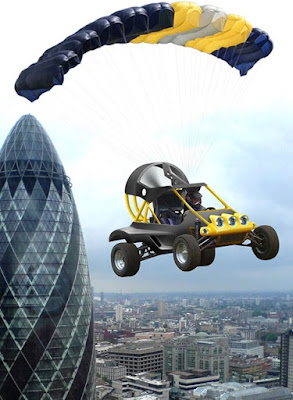 The Parajet Skycar will be the world's first carbon neutral flying car. The Skycar Expedition team plan to take the eye-catching vehicle from London to Timbouctou in 2009, using a combination of flight and driving to battle the tough Saharan terrain. The 3000 miles of journey from London to Timbouctou. The Parajet Skycar betweens a dune buggy and a paraglider. The Parajet Skycar powered by a biodiesel-modified Yamaha R1 1000cc motorcycle engine. The motor runs through a Continuously Variable Transmission either to power the rear wheels or to turn a large rear-facing propeller via a belt drive.The Parajet Skycar in fly mode will be suspended by the latest ram-air wing and capable of take-off from a field or airstrip in less than 200 metres. It will be easier and safer to fly than any other aircraft, as it has no pitch control and therefore impossible to stall or dive. Should the engine fail, the pilot would simply glide down into the nearest field or strip of sandy desert. In the event of catastrophic wing failure, car connection system failure or mid-air collision, an emergency ballistic reserve parachute can be deployed. Its steel framed chassis, subsequent models will be made from aluminium which will be lighter and thus increase range, performance and luggage capacity. It has independent 4 wheel suspension and rear wheel drive. One pilot and one passenger will travel side by side and in road mode the car will accelerate 0-100 kmph in 4.5 seconds, have a top speed of 180 kmph and a range of 400 km. In fly mode the Parajet Skycar will have a take-off speed of 60 kmph, a top speed of 110 kmph and a range of 300 km. Cruising altitude will be 2000 �C 3000 ft with a maximum altitude of 15,000 ft. Conversion from "road mode" to "fly mode" and visa-versa will take just three minutes. The prototype is expected to cost only UK£35,000, Cool!