A keynote speech titled "Automotive Electronics Continue to Evolve" was delivered by Hiroshi Miyata, general manager of Electronics Engineering Div I in the Vehicle Engineering Group of Toyota Motor Corp, on the first day of AT International 2008.

He pointed out the challenges that the automotive industry is currently facing and explained what solutions electronics technologies can offer, while introducing Toyota's efforts.

As challenges that the automotive industry is facing, he pointed out three major limitations concerning the environment, energy and safety amid the strong expectation for the market's expansion from now. Then he insisted that automotive electronics are the key to the realization of "a sustainable mobility society," where many people can enjoy the convenience and fun of automobiles, overcoming these limitations.

He introduced hybrid technology first as Toyota's approach. After reviewing the company's advancement of improving hybrids since developing the Prius, he explained the packaging of power semiconductors and the state of battery development.

Then he stressed that the industry will need general efforts to coordinate human beings, cars and infrastructure from now on, by linking rescue infrastructure and safety systems on automobiles, for example.

As efforts on the infrastructure side, he cited the use of ETC system, which can bring about reduction in CO2 emissions, as well as the probe traffic information system, which collects information from a number of cars and uses the information to alleviate traffic congestions, for example. For the future, he hopes that cars will adapt to drivers, predict their actions and help drivers improve their driving ability, he said.

At the end, he indicated the direction of automotive electronics development. As a recent challenge, he referred to the current situation, where control systems have become too complicated and how even fixing part of them can impact an overall program. Toyota is stratifying and structuring functions and software in a bid to resolve this situation, he said.

Regarding measures to develop software, he advocated shift to the development of modelbases that allow automatic code generation from now on.

Miyata concluded his speech by saying the ultimate form of the car is "Kintoun" (the somersault cloud), an imaginary form of transportation that appears in the Dragon Ball series of comics and cooperation between the automobile and automotive electronics industries is essential to shorten the time to develop it. 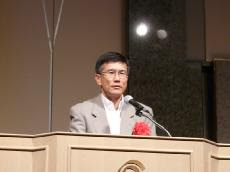