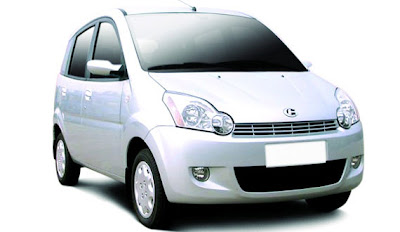 Still looking for an electric car which isn't Noddy-sized and can take all your family junk? Well, next week you'll have a fresh alternative to electric superminis like the G-Wiz as the NICE Car Company is unveiling a fully electric MPV dubbed the Ze-O.
NICE, which already makes the electric Mega City, says the Ze-O is set for a £14,000 price tag and will hit 55mph over a 65 mile range. Details beyond that are scarce right now -- the full lowdown comes 23 July at the British Motor Show -- but if it is a family-sized four seater, those specs aren't bad.
NICE is also promising a Lithium-ion version which means those figures might get a boost in the future too.
The Ze-O's due on sale autumn, but SmartPlanet's off to the British Motor Show next week so keep your eyes dialled here for photos and a first-hand report.
In the meantime, Autobloggreen has the full press release behind the story.
at 7/20/2008 11:03:00 AM
Tags: Car News, electric cars