What do you get when you cross a Geo Metro with an electric forklift, a golf cart, and a bunch of used batteries? You get a ridiculously inexpensive, home-built, street-legal electric car.

This battery powered grocery getter was built by Darin Cosgrove and Ivan Limburg, of Brockville, Ontario. The friends were looking for a project to do in Limburg’s new workshop, and set their sights on building an EV after reading about a couple of DIY electric car conversions on the web.

Since neither of them had tackled anything quite like this before, they were wary of breaking the bank on what amounted to a rolling science project with a questionable outcome. So they bought all their parts & supplies second hand, and scrounged a few for free. They even recovered some of their costs by selling left over parts as they went along… 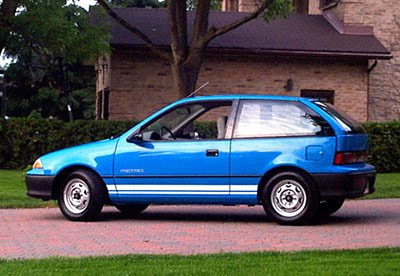 * They sold the Geo’s engine and its recently replaced gas tank through an online ad - you don’t need either of those in an EV!

* Most of the electric parts came from an old, used forklift they bought for $500. After removing its four DC motors and control module, they got most of their money back by selling the 16,000 lb chassis to a metal recycler, and one of the extra motors to another EV builder.

They caught a big break when it came time to get the car’s lead acid batteries.

“We met another EV owner who liked what we were doing, so he gave us a bunch of used batteries he had just replaced in his own EV,” says Cosgrove.

But the second hand lead has a downside: they probably could have doubled the distance the car could go on a charge if they had bought new.

Rear batteriesThe Metro’s small 48 volt battery pack is a major clue as to how they were able to keep costs so low: Cosgrove and Limburg built the car with ridiculously modest specs. With just eight 6 volt batteries and a motor controller from a golf cart, it’s an understatement to say the electric Metro doesn’t go very fast or very far.

But they say it does just fine as a neighbourhood runabout on the quiet streets of their small city. And by aiming low, they were able to avoid the pricier components and extra batteries needed for a more powerful, highway capable EV.

Their forklift motor driven Metro passed inspection and went on the road a few months ago. Since then it has gone more than 650 kilometers (400 miles) without using a drop of gas… or oil (hey - it was a 16 year old Geo engine after all).

Forklift motor installed on transmissionCosgrove reports a top speed of 65 km/h (40 mph), a range of 15 to 25 km (9 to 15 miles) on a charge, and says it costs about 3 cents per km (4.8 cents per mile) to run on renewably sourced, clean electricity. (For comparison, Limburg figures his gasoline powered compact pickup truck costs 12 cents per km to drive.)

While it’s fair to say the electric Metro’s performance won’t cause any worry over at Tesla Motors, you can also be sure its builders aren’t losing much sleep about car payments either. 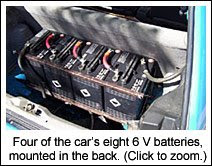 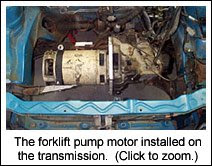 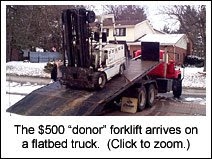