The 2010 Ford Fusion's final fuel economy certification was completed this week at Ford's testing laboratories in Allen Park, Mich., and the vehicle will carry an EPA label of 41 mpg for city driving and 36 mpg on the highway when it goes on sale this spring. The Fusion Hybrid, which beats even the much smaller Honda Civic hybrid by 1 mpg in city driving, can travel more than 700 miles on a single tank of gas. 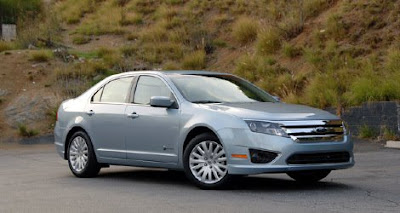 To deliver the class leading fuel economy performance, Ford's engineers spent the past three years developing in-house the vehicle's next-generation hybrid propulsion system. It allows the Fusion and Mercury Milan hybrid to travel up to 47 miles per hour in pure electric mode, faster than the Toyota Camry and all other hybrids currently on the road. In addition, the system's Advanced Intake Variable Cam Timing allows the Fusion and Milan hybrids to more seamlessly transition from gas to electric mode and vice-versa.

"The Fusion Hybrid's ability to run at a much higher speed in electric mode allows drivers to maximize fuel efficiently in many driving situations," said Praveen Cherian, Fusion Hybrid program leader. "For example, this would allow drivers to travel around their subdivision and parking areas in all-electric mode."

-- Smart climate control system, which monitors cabin temperature and only runs the gas engine as needed to heat the cabin. It also includes an electric air conditioning compressor to further minimize engine use.

-- Regenerative brake system, which captures the energy normally lost through friction in braking and stores it. Nearly 94 percent energy recovery is achieved by delivering full regenerative braking, which means only 6 percent of braking is through traditional friction brakes