Barack Obama, Your Limousine is Ready

The Presidential changing of the guard officially happens in one week, and when Barack Obama stakes the stand as Commander in Chief of the United States, General Motors will have its latest Cadillac Presidential Limousine waiting.

While GM was very shy to release the full specifications of the limo (for obvious reasons), it's clear that Obama's ride will be a mix of GM parts, notably the Escalade headlamps and DTS rear end, all riding on the platform shared with GM's heavy-duty pickups. Expect this special limo to be full of technological gadgetry suitable only for Citizen Number One.

General Motors has issued a full release which can be found by clicking through the post, and click through our gallery to see the Presidential limo from all angles. 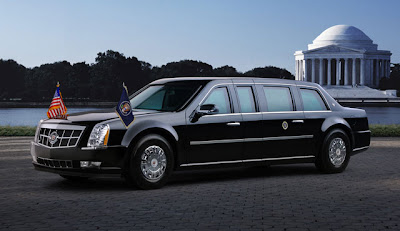 WASHINGTON – As Americans celebrate the inauguration of a new president of the United States next week, another new Cadillac will grace Pennsylvania Avenue to lead the proceedings. President Barack Obama will ride in an all-new Cadillac Presidential Limousine, continuing a long tradition of Cadillac limousines that have served many U.S. presidents.

"Cadillac is honored to again provide a new Presidential Limousine," said Mark McNabb, North America vice president, Cadillac/Premium Channel. "This is a great American tradition that we're delighted to renew with an all-new car featuring the best of Cadillac's dramatic design and technology." 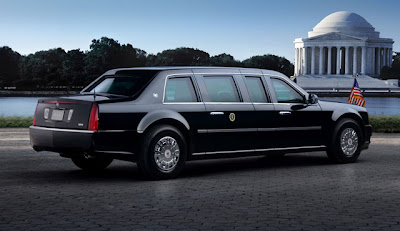 The image of an American president greeting crowds from a Cadillac limousine dates to President Woodrow Wilson and the early days of the automobile, and continues into a historic new era. The latest Cadillac Presidential Limousine is a completely new design, succeeding the DTS Presidential Limousine that debuted in 2004. The new car incorporates many of the dramatic design and technology features of new and highly acclaimed Cadillac vehicles in a purpose-built format tailored to specific and exacting specifications befitting presidential transport.

Inside and out, the Cadillac Presidential Limousine includes many of the brand's signature design elements. Assertive, modern and elegant, the front of the car includes the intricate, dual-textured grille made famous by Cadillac's most popular current models, the CTS sport sedan and Escalade. Vertical design elements, such as the car's front and rear lighting, mirror those used on production models.

For largely functional reasons, such as optimal outward visibility, the car is slightly more upright than its predecessor. However, this new Cadillac Presidential Limousine occupies roughly the same overall footprint on the road as the previous model, with a similar size and proportion.

The side and rear profiles of the new Presidential Limousine are classic, elegant forms, evocative of Cadillac's STS and DTS luxury sedans. Inside the cabin, the car includes the finest examples of Cadillac's recent renaissance in design, technology and craftsmanship. The cabin blends modern design and technology with old-world craftsmanship. Major aspects of the cabin are cut and sewn by hand, the same process used in popular Cadillac models such as the CTS sport sedan. 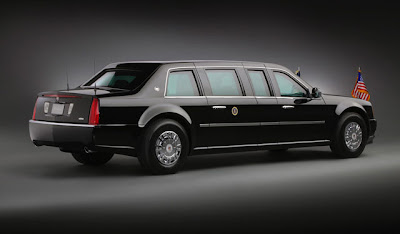 Naturally, many purpose-built aspects of the car are specially designed and prepared for presidential use. The rear passenger area includes an extensive executive compartment with ample seating space, outward visibility and useful mobile office features.

The car was designed, developed and tested by specialists who adhered to an extensive set of specifications. It was subjected to an extreme testing regimen to ensure performance that achieves precise functional requirements. In doing so, security provisions were undertaken at all times during development to ensure the car's functional capabilities are preserved and confidential.

History – Cadillac and the U.S. Presidency
Cadillac has built limousines and special vehicles for U.S. presidents, diplomats, ambassadors and foreign dignitaries since the early 20th century, an iconic aspect of the brand that continues today.

Cadillac's central role began during World War I, when many Cadillac engines and cars were transferred to military and government service because of their superior durability and power. One of the first chief executives to use a Cadillac was President Wilson, who rode through the streets of Boston during a World War I victory parade in 1919. A lavish 1928 Cadillac town car was used in the Calvin Coolidge administration.

In 1938, two Cadillac convertibles, dubbed the "Queen Mary" and "Queen Elizabeth," were delivered to the U.S. government. Named after the great ocean liners of the time, the vehicles were 21.5 feet long, weighed 7,660 pounds and were equipped with a full ammunition arsenal, two-way radios and heavy-duty generators. Durable and reliable, the two "Queens" served Presidents Franklin D. Roosevelt, Harry S. Truman and Dwight D. Eisenhower.

President Eisenhower, known as a car buff, rode in one of the first Cadillac Eldorado models ever produced during his 1953 inaugural parade. The Eldorado represented a high point in automobile design history, as it had the first wraparound windshield, a feature quickly adopted on other new production models.

The Ronald W. Reagan administration was delivered a 1983 Cadillac Fleetwood limousine and a Cadillac Fleetwood Brougham – Presidential Series was delivered to the William J. Clinton administration in 1993. Unlike previous models that typically were Cadillac cars adapted and modified by independent limousine companies, the 1993 Presidential Brougham was designed, developed and manufactured totally within General Motors and Cadillac. This included an extensive set of security measures to maintain confidentiality, a process that continues today.

Cadillac has produced two presidential limousines this decade that remain in service. The first was a Deville Presidential model delivered to President George W. Bush in 2001. In 2004, President Bush debuted a new DTS Presidential model. It was the first application of a new design that launched later that year for the production DTS full-size sedan. 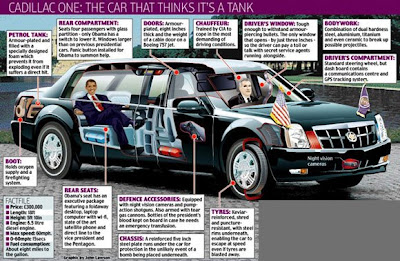