Detroit says the SUV is (almost) dead. Long live the SUV? So says Jalopnik's editor-in-chief in his monthly guest analyis for PopularMechanics.com. 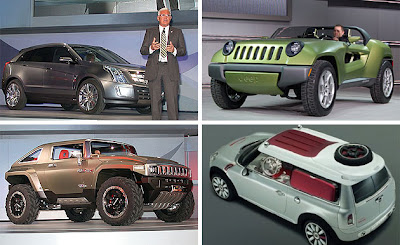 Fuel-efficient concept SUVs like (clockwise from top left) the Cadillac Provoq, Jeep Renegade, Mini Crossman and Hummer HX could be a sight for sore wallets—and the auto industry.
By Ray Wert
Published on: June 17, 2008
The sunny days of the soccer mom are gone. Fact is, America's four-wheel-drive SUVs were done with their full-time duties as combination family-haulers, mall rovers and (my personal favorite) mobile storage units on the same day that gas anchored itself at four bucks a gallon. Sales of full-size SUVs are off by double digits for just about every consecutive month this year. In April, sales of these mastodons of the macadam plummeted by a whopping 32 percent. And the trend doesn't appear to be rebounding—even Detroit admits that.

Sorry, folks, but the SUV is dead ... as we know it. But all is not lost for lovers of these big, honkin', truck-bodied sport utility vehicles. What? You say the SUV can actually make a comeback? I think so, as long as they're not actually big, honkin' or truck-bodied. No, the keys to the next generation of American SUVs will be advancements in powertrains and severe weight trimming that could actually save fuel and boost economy.

And let's be clear here: The current crop of SUVs, like pickup trucks, will still exist in this new world of high gas prices. But instead of the nouveau yuppies fueling abnormally high sales, we'll see trucks reprise their role as a niche market, just like it was in the 1970s and early 80s. Pickup trucks will once again be the domain of good ol' country farming folks—those that really do need to tow, and guys that wear tool belts more often than ties. SUVs will serve as the primary mode of transportation for forest rangers, hardcore off-road enthusiasts and, of course, politicians. These burdensome beasts will become less like the four-wheeled equivalent of a Prada purse and more like the utility vehicles they were always supposed to be. And, man, is it about time.

But that's in the near-term.

The future still holds the promise that the once-great SUV will again rise to prominence, at least if we're willing to believe the concepts we've seen out of the automakers' design studios. Now these won't be the Chevy Suburbans, Ford Expeditions and Toyota Sequoias we've been used to for the past decade or so. Oh no, these things will definitely need to get much smaller. For starters, at this year's Detroit auto show the Jeep Renegade concept got a bunch of play from the media. It's an SUV to be sure, but this B-segment (that's the Mini Cooper–size) rock crawler is powered—in concept at least—by a 40-mile-range lithium-ion battery pack tied to two electric 268-hp motors. When that's not enough, it'll have a punchy little 1.5-liter, three-cylinder diesel engine capable of providing an additional 115 horses. Combine the two powertrains, and Chrysler's new electric braintrust claims an estimated 110 mpg—not too shabby for an SUV.

Speaking of Mini-sizing the SUV, Chrysler's not the only automaker out there dreaming big by thinking small. Mini itself will be getting into the act. We're told we might see an off-road version of the venerable built-by-BMW brand revealed sometime this year. Spy photographers and other sources we've heard from are calling it the Mini Crossman. And if the spy photos are on point, this pint-size utility vehicle could literally become the new definition of "cute ute." We haven't yet heard specifics on the powerplant—or whether it'll be built with aluminum, carbon fiber or even adamantium to reduce weight. But if the fuel economy numbers look anything like the traditional Cooper, the Mini SUV will be a sight for sore wallets at the gas pump.

The General claims to have some tricks up its sleeve, too: Witness the Cadillac Provoq that debuted at the Consumer Electronics Show in January. It's an awd concept built on the E-Flex platform—the same one underpinning the Chevy Volt. But unlike the Volt's gas/electric motor, the Provoq is supposed to—in concept, of course—run for 280 miles on a single fill-up of hydrogen, plus an extra 20 miles thanks to the plug-in battery power. And Cadillac kindly provides solar panels on the roof to help power the onboard accessories. The Provoq may not be after the hilltopper set like the Renegade or the Halo-esque Hummer HX, but with the Caddy badge and bling up front, it could be a hit with the highly coveted "urban rapper millionaire" demographic looking to turn in their Navigators, Mark LTs and Escalades.

So while Detroit may be scaling back on the big, hulking, gas-burning SUV for now, let's not put the nail in the coffin just yet. If we're to believe automaker speak at its conceptual finest, the future might yet allow those who enjoy hitting the unpaved road to keep on Jeepin' on. For those of us just looking for more space to throw our junk, we might be better off spending the extra dough at the local rent-a-unit. Of course, storage space could get cheap if someone figures out how to recycle all those SUVs on the used car lot into something a bit more practical than the wasteland of the Great Fuel Crunch of '08.
at 6/18/2008 10:38:00 AM
Tags: cars, Life