For Knight Rider 3.0, KITT Mustang Gets a Supercomputer Upgrade

With a hand from Microsoft, NBC has re-engineered the tricked-out car once again for a full TV run this fall. The result, as PopMech.com's Hollywood geek finds live from the floor of Comic-Con 2008, is part-Shelby, part-Smart Car, but mostly an evolving HAL 9000 on wheels. 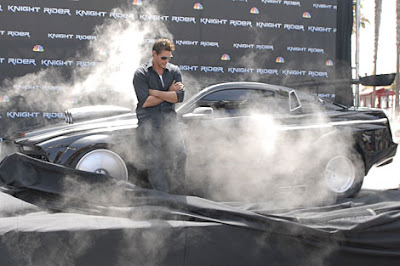 The annual Comic-Con geekfest here is as good a place as any to set the high-tech record straight on NBC's new Knight Rider series. After all, fans of the original cult hit still needed to be sold on the concept after objecting to February's two-hour movie, which upgraded KITT from a Pontiac Trans Am to a Mustang Shelby but overlooked many of the notoriously gadget-loaded car's key features—most egregiously its trademark car-jumping device.

"'Turbo boost' just didn't fit in the two-hour," says executive producer Dave Bartis, "but Gary found a way to do it in the first act of the first episode back." That would be Gary Scott Thompson, the Las Vegas creator that NBC brought on in April to build a full-blown weekly action series from the one-off TV movie.

Given the quarter-century since David Hasselhoff was behind the wheel, Thompson felt strongly that KITT needed to be rethought from the ground-up. "As my kid said when we were watching it, ‘Big deal, our car can talk,'" Thompson explains. "Very soon, cars will have sensors that will drive themselves. So the whole idea was, ‘Yes, but can your car do this?'"

To demonstrate a few of KITT's new tricks, the Knight Rider team screened a sizzle reel here on Thursday for gathered fans. The clip began with the kind of fancy driving that audiences might expect, but earned a collective "oooh" as soon as lead actors Justin Bruening and Deanna Russo jumped into the back of a black pickup truck, only to have the vehicle transform back into a Shelby around them. "We're trying to get that reaction on a weekly basis—multiple times during an episode," says Thompson.


KITT 3.0 at ComicCon 2008.The new shape-shifting trick not only vaults the show to near Transformers-level special effects but also demonstrates Thompson's view that KITT ought to embody cutting-edge, real-world technology. That meant thinking of the car as a supercomputer and incorporating the latest in nanotechnology and artificial intelligence, informed by field trips to Microsoft headquarters, where Thompson and his team were briefed on advances still a few years off.

The result is more than just a talking car (voiced by Val Kilmer on-screen)—this Mustang is constantly learning and evolving from episode to episode. "Every week, we get the script and see what the car can do," says Bruening, who assumes the role once inhabited by Hasselhoff (who, along with the original KITT Trans Am, could make an appearance on the show down the road). "You can upgrade it the way you can a normal computer."

That means Russo's character can easily reprogram KITT to adapt to new physical challenges, such as driving on sand. However far-fetched a transforming car might sound, Thompson wanted to keep the concept grounded in reality. "If a car could actually transform itself into something else," he says, "you are still limited by the amount of mass that car has—unless it leaves part of it behind, like the Batmobile [in Dark Knight], where the motorcycle shoots out." 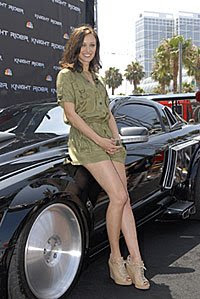 Thompson is hoping audiences will tune in each week to see what new forms KITT may take (a supped-up "attack mode," set to be unveiled at Comic-Con today, was custom-built for the show by Smart Car designer Harald Belker). But the show's production teams also sees the artificial intelligence angle as a way to develop a "personality" for the car over the course of a season. "In his way, KITT is learning from the people on this team. He starts out constantly asking questions," says Thompson.

And as KITT evolves, he will also become more dangerous. Just as HAL 9000 eventually takes over the ship in 2001: A Space Odyssey, KITT is capable of disobeying direct commands—or answering to shady orders from a higher source. The fact that no one quite knows where the funding for Knight Industries' R&D department comes from suggests that the military or another secret division may have its own plans for the super-weapon.

"When you're dealing with a computer's artificial intelligence, there's always a chance something could happen," Thompson confided backstage after the Comic-Con presentation. "It's something you see in Episode Two. We set it up very early that there are possible things that could happen." By mid-season, he promises, audiences will have a clear idea of the true dynamic between Michael Knight and his cutting-edge new set of wheels.
at 7/26/2008 06:42:00 AM
Tags: cars news