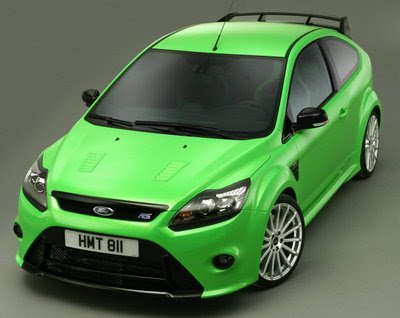 It is by far the most important debut at this month’s London Motor Show and perhaps the most anticipated attainable performance car of the year; Ford’s scorching hot 300Hp Focus RS. Following an earlier leak today, we managed to get our hands on the high resolution image gallery along with the official press release.

You may have noticed that we haven’t mentioned the word concept this time; that’s because neither does Ford as the London Show’s Focus RS is actually the production version that will go on sale in Europe in early 2009. Although the new RS is based on the recently revised Focus ST, Jost Capito, Ford Europe’s Director for Performance Vehicles, and his team, performed many mods to the car, starting with the 2.5-litre 5-cylinder turbocharged engine.

Revisions include unique camshafts, a revised cylinder head and gasket and new intake and exhaust manifold system. According to Ford's engineers, the improved 2.5 Turbo is targeting a power output of 300PS and over 410Nm of torque (ST: 225Hp). Although the hot hatch is still under development, Ford supports that early performance testing indicates a 0-100km/h (0-62mph) time of less than 6.0 seconds.

Like its predecessor, the first generation Focus RS that went out of production in 2002, Ford’s newest hot hatch retains the front wheel drive set up of the Focus ST. In order to put 300PS on the road through the front wheels in a civilized manner, Capito and his team of engineers performed several modifications, starting off with the addition of Quaife Automatic Torque Biasing limited-slip differential.

Moreover, the RS gained an innovative front suspension system known as a ‘RevoKnuckle’, which is designed to reduce unwanted steering disturbance and torque steer. According to Capito, the results are staggering and it eliminates the need of an AWD system that would add extra weigh to the car.

“Our work has shown clearly that our approach in combining a tuned RevoKnuckle with the Quaife differential is an ideal solution for a high performance front-wheel-drive road car like Focus RS”, said Jost Capito.

“As you would expect, we gave all-wheel-drive careful consideration, but by combining and tuning these elements and learning from Ford’s expertise in industry-leading handling, we have managed to eliminate the weight of AWD from the car and still have been able to target a class-leading balance of traction, handling and performance. The result is a lightweight set-up, that will deliver the right blend of traction and razor sharp controllability” Capito concluded.

In terms of styling, we think the pictures speak for themselves. The Focus RS is one hatch you definitely won’t ignore on the road, even without the provocative bright green paint that brings to mind the 1970s Le Mans Green of the Escort RS1600 era. The Focus RS is equipped with an aggressive bodykit that includes a new front bumper, a twin-element black roof spoiler echoing RS models of the past and a newly designed rear bumper that incorporates a large venturi tunnel and two chromed exhaust tail pipes.

Moreover, the widened front and rear quarter panels have been revised to incorporate wider wheel arches that house 19-inch alloys, wrapped in 235/35 low profile Continental tires. Other notable features include the styling details highlighted in gloss ‘piano black’, the RS-badged vents behind the front wheel arches and the two 80’s RS-style bonnet louvers.

Admittedly, the Focus RS’ cabin is less impressive than car’s outside as the most notable differences between the ST concern the bi-colour sculpted Recaro bucket seats, the brushed aluminium highlights and the carbon-look trim on the centre console. However, having driven the 225Hp Focus ST, that’s the last thing we’d care about once we got behind the wheel of this green monster. 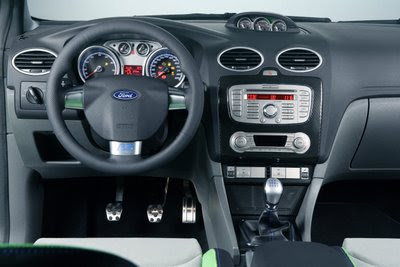 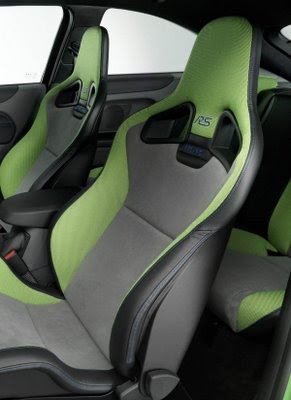 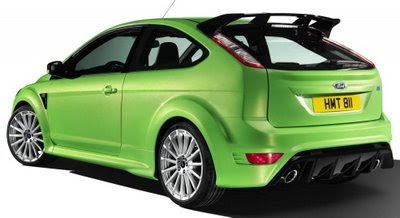 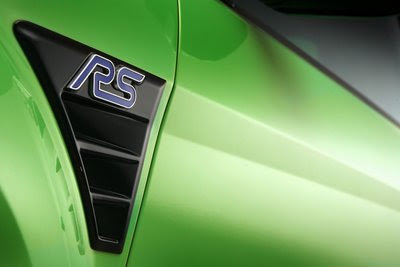 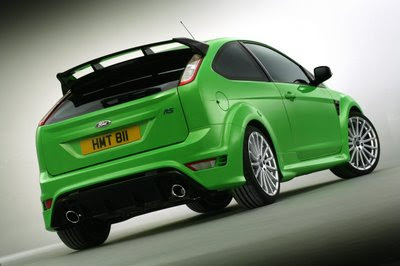