In-car video camera and GPS logger: Be your own Big Brother 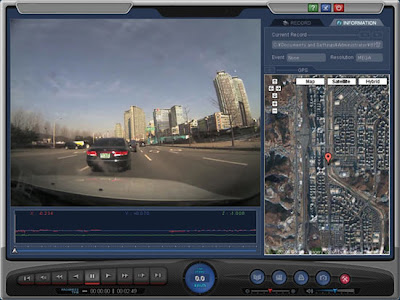 The Car Camera Voyager Pro comes coupled with a GPS logger, and altogether the unit will keep recordings of your driving and track where you went. Depending on what you want to use it for, it could help in a world of ways. If you got in an accident, say, you'd have a video recording — not a 360 one, mind you — but at least enough that you'll have photographic evidence of what really happened if anyone involved isn't giving a straight recount of things.
If you have kids (or you're just paranoid), you'll also have a log of where your car's been so you can make sure your little ones don't get to enjoy their childhood. The Car Camera Voyager Pro can operate manually or automatically, and features a slick graphic user interface with Google Earth compatibility for a visual record or your trip. If only it could give directions, too, then you wouldn't have to buy anything else — just the Car Camera Voyager Pro for $450.
at 7/19/2008 06:30:00 AM
Tags: cars, Life