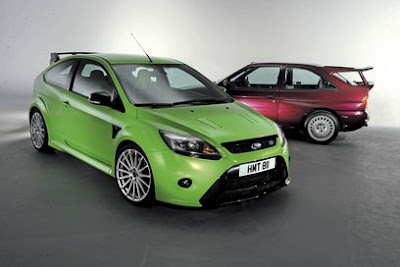 It’s the showdown that every Ford fan has been waiting for – the new Focus RS pitched head-to-head with the legendary Escort Cosworth!

As the car giant releases full details on the RS, Auto Express has brought the Cossie and the hottest Focus yet together for an exclusive photoshoot. So, is the Escort about to lose its crown as the most powerful hatch to come out of Essex? Here’s the answer...

Producing 227bhp, the Cosworth was quite a car in its time – but today, it looks almost bland in comparison to the RS. Only that huge rear wing makes a statement. When the new Focus hits UK showrooms early next year, it is set to storm its way on to the scene with a mammoth 296bhp. That’s a 69bhp power increase over the hot Escort, and a staggering 74bhp hike over the 222bhp Focus ST.

It’s following in the footsteps of speedy forebears such as the Sierra RS Cosworth and the mighty Group B rally car-derived RS200.

The Focus will be the most powerful roadgoing Ford ever to wear the 40-year-old Rallye Sport badge. It’s also the first RS to feature a five-cylinder engine.

As Auto Express revealed in Issue 1,017, the car will use a revised version of the turbocharged 2.5-litre Duratec motor, found in the ST. And as with all hot Focus models so far, the RS will favour a lighter and cheaper front-wheel-drive set-up over the heavier and more expensive four-wheel-drive option of the Cosworth. This huge power hike will result in a scorching 0 time of less than six seconds and

a top speed well beyond the magic mark.

While prices have yet to be confirmed, Ford has always prided itself on giving any RS model affordable performance, so a figure of less than £25,000 is expected. The Focus RS is also staying true to its roots in its colour – the bright green paint is a modern take on the Seventies’ Le Mans Green of the Escort RS1600.

Director for Performance Vehicles Jost Capito and his team of expert engineers have worked tirelessly to squeeze every last drop of power out of the five-cylinder unit. It’s not as simple as increasing the boost pressure on the turbocharger, though. The blue oval has redeveloped the engine from the ground up with high-performance camshafts, a tweaked intake and manifold system, plus a souped-up cylinder head and gasket.

A wealth of advanced new mechanicals are on-hand to rein in the 410Nm of torque produced. Ford employed the services of automotive engineer and torque specialist Quaife to develop a unique Automatic Torque Biasing limited-slip differential.

The Quaife set-up will work in conjunction with a new front suspension system, which has been specifically designed for the RS to reduce torque steer and improve traction.

The front wheels will still be suspended by a traditional McPherson strut arm, but the geometry will be intricately set up – again to cut down on the torque steer and wheelspin for which previous high-performance Focus models are renowned.

Despite the desperate efforts of most car manufacturers to downsize and boost economy as much as possible, the future looks bright for Ford’s muscular machines. And while the Focus RS is still under development, stay tuned to hear of more technological performance marvels as it nears production.

The blue oval has announced it will give the public its first preview of the RS at the British Motor Show at the ExCeL arena in London later this month.