Nissan has brought out the Altima for the second time in its four generations. The reinvented version is totally redesigned for the latest generation. It offers more performance, comfort, safety, economy, and better looks than last year’s model.

The Altima now resemble the Maxima now in looks. The Altima is s a couple of inches shorter on the outside, but has more room on the inside, including a spacious trunk. It has fold-down rear seats that allow the trunk to expand into the cabin for carrying big long things.

Nissan’s aim of the redesigning of Altima was to bring the feel and power of a luxury car to this everyman’s midsize sedan. Nissan has succeeded with the Altima model in that. It has the V6 engine and all the options, including plush leather. 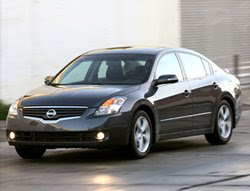 The 2.5SL uses the continuously variable transmission, and adds leather interior with heated front seats and power driver’s seat, moon roof, alloy wheels, dual-zone temp controls and rear air conditioning vents. The Nissan engineers while  redesigning the Altima, had attempted to create more cabin space, and given one inch less to work with, on account of the reduction in wheelbase. They made it by stretching the distance between A-pillar and C-pillar, thus shortening the cowl and deck.