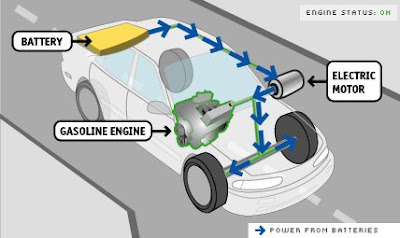 Ed. note: This is now the fifth post in the Green Basics series of posts that TreeHugger is writing to provide basic information about important ideas, materials and technologies for new greenies (or those who just need a quick refresher). Read on and stay tuned!

One of the most symbolic and popular symbols of the "green" movement is the hybrid-electric car, known better as simply the hybrid car. These vehicles extend the functionality of traditional internal combustion engines by combining them with a battery-powered electric motor, which takes some of the work off the combustion engine's hands. This allows the cars similar performance to a comparable conventional car with a much smaller gasoline engine, and an overall increase in fuel efficiency. Contrary to what some people think, these hybrid cars do not need to be plugged in to charge up the batteries. 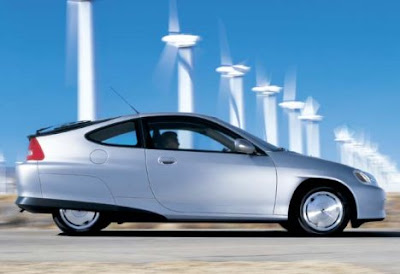 The on-board batteries in hybrid cars are recharged by capturing the kinetic energy created when using the brakes (commonly referred to as "regenerative braking"), and some hybrids use the combustion engine to generate electricity by spinning an electrical generator to either recharge the battery or directly feed power to an electric motor that drives the vehicle.

The Toyota Prius is the best-selling hybrid in the US

Generally, there are two kind of hybrid cars: full hybrids and mild hybrids. Full hybrid systems allow both the gasoline engine and electric motor to provide power to the wheels; often, this allows the vehicle to shut down the gasoline engine when stopped at a red light, and to start driving the car on electric power only. The hybrid systems available from Toyota, Lexus and Ford employ this technology. Mild hybrids, by contrast, use the electric motor primarily to boost the performance of the gasoline engine, when it needs extra power; this technology is seen most often in the hybrids sold by General Motors. In the mild hybrid vehicles available today, most use what's known as a Stop/Start hybrid system, which shuts the gasoline engine off at idle (like at a red light) and instantly starts it up again on demand (like when the light turns green and you hit the accelerator). For a full explanation of the differences between full and mild hybrids, see this article at HybridCars.com.

There are currently eight hybrid cars available: Toyota Prius, Toyota Camry, Honda Accord, Honda Civic, Lexus GS 450h, Lexus LS 600h L, Saturn Aura Green Line and Nissan Altima; the Honda Insight has been retired, but many are still on the road. Additionally, there are five hybrid SUVs and minivans available: Toyota Highlander, Lexus RX 400h, Ford Escape, Mercury Mariner and Saturn Vue Green Line. A handful of other hybrid cars, SUVs, minivans and pick-up trucks are expected to go into production and be available in the next two or three years. 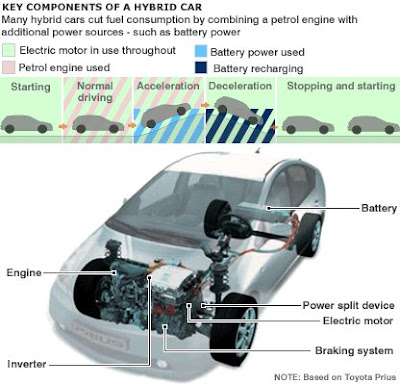 Here's an illustration of the basic operation of a hybrid car

All of the hybrid cars available today are considered "parallel hybrids," for the ability of both the electric motor and gasoline engine to provide power to the wheels. A "series hybrid," by contrast, uses the gasoline engine to turn an electric generator, which then either powers the car or charges on-board batteries. As such, the gasoline engine is not used to make the car go. The Chevy Volt, the much-hyped concept car from General Motors, is such a hybrid, though as HybridCars.com notes, "The folks from GM don't want to use the term 'series hybrid' to refer to their Chevy Volt concept vehicle (for marketing purposes), but that's what it is." 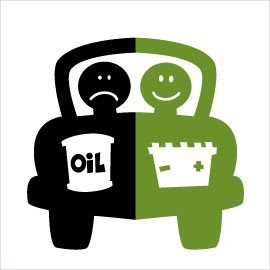 Taken as a whole, hybrids offer a mixed bag of issues, when it comes to their environmental considerations. They offer greater fuel efficiency and fewer greenhouse gas and particular emissions than conventional cars, but still run on gasoline, a finite and (some say) diminishing resource. They represent a technological step forward, but cost more money to buy and ultimately maintain than conventional cars. The electric batteries offer a way to power a car without using gasoline, but add weight to the car (reducing its efficiency) and are very costly (both financially and environmentally) to produce and dispose of. Green car enthusiasts generally accept hybrids as a positive step forward in greener personal transportation, but not as a long-term solution for a greener future.

In addition to the Chevy Volt series hybrid mentioned above, the next development in hybrid cars is likely to be the "plug-in hybrid electric vehicle" (PHEV), which has a larger battery pack more capable of powering the vehicle on its own, without the need of the gasoline engine, for a number of miles. Though not required, these cars can be plugged in to help charge up the batteries; stay tuned for a future "Green Basics" column, all about plug-in hybrids.

There are lots of resources for further reading; check out Wikipedia, hybridcars.com and hybrid-car.org to get started. Here at TreeHugger, have a peek at our Cars + Transportation category for more, or type "hybrid" into the search engine above to dig in to our coverage of hybrids.