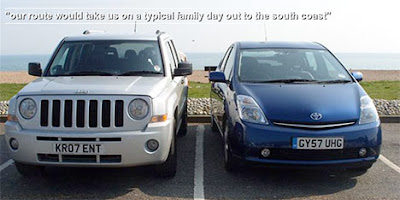 The Old Hybrid vs. Diesel Debate
It's very hard to be completely scientific when doing real-world car tests. There are lots of variables to keep track of, and gathering enough data can take a while (just one drive leaves a big margin of error). But still, if taken with a grain of salt, these tests are generally useful.

But once in a while, you find such a test that has gotten something very wrong, enough to put the whole conclusion in doubt. It's the case with "Toyota Prius vs Jeep Patriot: the great MPG test by Claire Edwards and Jay Nagley" by Clean Green Cars. What were their conclusions and why do we think they're wrong? Read on.

Results of the Toyota Prius Hybrid vs. Jeep Patriot Diesel
The idea is simple: Get the best-selling hybrid car in the world and a SUV that recently was acclaimed for its good fuel economy, and see how they stack up against each other. Right from the start there's a temptation (conscious or not) for journalists to do things in such a way that the final result is counter-intuitive. That helps attract readers and makes for a more punchy article. We can't know if that was a factor here, but Claire Edwards and Jay Nagley (the writers) seem to have done a good job of making the test fair. They drove in both the city and on the highway, they followed speed limits and swapped car in the middle of the test to compensate for driving styles.

Toyota Prius vs. Jeep Patriot: Test Results
So what were the test's results? Well, after 160 miles, the final numbers on the onboard computers were 57 MPG for the Prius and 42 MPG for the Jeep. These are imperial gallons since they are in the UK. In US gallons, that's 47.4 MPG and 34.9 MPG respectively.

But then they went to fill up both cars to see how many gallons that would take so they could re-calculate the MPG numbers to make sure that the onboard computers were not too far off. The numbers they got were very different from the firsts: 38.9 MPG (32.3 MPG US) for the Jeep and 39.9 MPG (33.2 MPG US) for the Prius.

Toyota Prius vs. Jeep Patriot: Why is the Test Flawed?
Reddit commenter nomopongo beat us to the punch, so we'll just quote him/her here: "The Prius does not use a conventional fuel tank, and because of this, you can't use the refueling numbers in order to calculate MPG, unless you do it over many fill ups. The Prius uses a resin gas bladder in order to minimize fume-related pollution. The article is wrong."

The Prius hybrid indeed uses a laminated resin fuel bladder inside its gas tank to reduce the amount of gasoline fumes that escape, thus reducing air pollution. Nominally, the gas tank of the Prius can contain 11 US gallons, but owners of the car have reported fill ups from "empty" varying from 8 gallons to over 12 gallons.

Because of that, there is a very good chance that the onboard computer of the Prius was closer to the true fuel economy numbers than the 'fill up' numbers, and so the whole conclusion of the test is thrown in serious doubt.

And if we look at some of the obsessive fuel economy trackers out there, it seems more likely that the Prius got around 47 MPG US than 33 MPG US. For example, John1701a has a lifetime average (over 98k miles) of 47.9 MPG US with his second generation Prius hybrid, and he has used a gasoline/ethanol mix (probably E10) for most of that, which reduces MPG a bit.