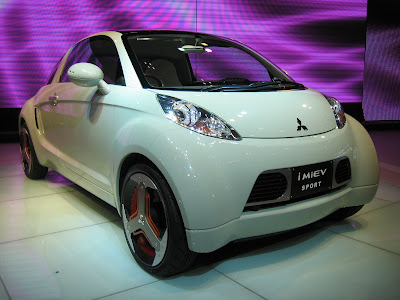 (image courtesy of Wikipedia )
The Japan Times reported this week that leading supermarket chain, Aeon Co., Ltd., is contemplating setting up electric car charging ports at its supermarkets in conjunction with Japanese automobile manufacturers. The announcement comes in the wake of a bevy of plans for the commercial release of electric vehicles such as Mitsubishi's i MiEV (pictured above) and Subaru R1e from Fuji Heavy in 2009.
The first generation of electric cars may take up to 14 hours to charge at home, however Aeon is looking to install chargers that can fill up your tank, so to speak, in around one hour. Perfect for the busy shopper.
The company wants to install its first trial electric car charger near Tokyo at its Laketown Mall in Koshigaya, Saitama Prefecture. Depending on the feedback from the trial, Aeon may set out to set up its very own electric car charging network nationwide.
Good news for both greenies and purse-conscious drivers alike!
Brought to you by Midorty of greenz.jp
at 6/22/2008 06:04:00 PM
Tags: cars