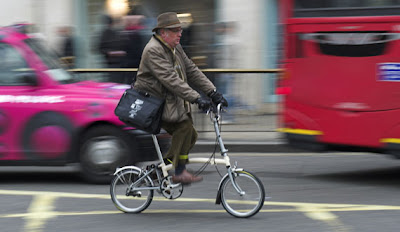 Whether you buy BoJo's claim that London's enjoying a "Summer of Cycling", there's no doubting the number of cyclists out this month and the cool cycle events coming soon. London Freewheel is the big event -- a chance to ride the capital's streets with tens of thousands of cyclists and without the fear of getting mowed down.
Most days, however, getting to work by bike can be a battle with the city's 78,000 peak time motorists. But if you're a new or aspiring cyclist, don't be put off. You can ride safely in London, and here are my ten tips to improve your odds. Please share your tips in the comments!
1. Always assume motorists will turn left without indicating
I've lost count of the number of times a car driving parallel to my right has tried to turn left without indicating. The classic scenario is when the car accelerates fast past you and then turns left without warning. Always, always ride on the assumption that this'll happen, and be ready to brake if necessary.
2. Watch out for other cyclists
Sadly, there's not much solidarity amongst London cyclists, meaning other cyclists are in my top five hazards to watch for. Keep a beady eye on other bikers: cyclists will jump red lights as you cross junctions, pull out without looking, ride too close to you as they overtake and generally behave unpredictably. London cyclists take a lot of risks, which is dangerous for the rest of us. I'm not immune from it. I hurt another cyclist in the only major road accident I've ever had, because I turned right without being able to see the oncoming cycle lane. I hate to say this, but assume the worst of your fellow cyclists.
3. Never undertake lorries and other HGVs
This is an obvious one, but never forget it: many of London's cyclist fatalities come from HGVs turning left on cyclists that they couldn't see. Being on the inside of a lorry is a bad place to be. Either overtake the lorry on the right-hand side, or slow down and let it get ahead of you.
4. Keep your tyres pumped up
This tip helps you go faster as well as ride safer, so what's not to like? Soft tyres makes for poor cornering, which is bad news when cars are whizzing past you just feet away. If you don't have a pump at home, drop in occasionally at your local bike shop and pump up there.
5. Report pot holes
If you ride the same route day in, day out, it's in your self-interest to report pot holes. Some will just give you a nasty jolt in the groin, but the worst can send you flying. Report holes with Fill That Hole.
6. Take the back roads
If you can afford to add a few minutes to your daily ride, you'll enjoy a quieter and far safer cycle commute by taking the back roads. Check out TFL's Cycle Maps or Camden Cyclists' Google Map to find the best route down in your 'hood. Sometimes the back routes are faster too. My Herne Hill to Tate Modern daily commute is quicker via Portland Street rather than Walworth Road because it has far fewer traffic lights.
7. On narrow London streets, occupy the middle
A typical residential street in London has cars on both sides and barely enough room for two cars to pass. The upshot for you as a cyclist: anyone over-taking you in car will be way too close. Follow the London Cycle Campaign's advice and ride in the middle of your lane, making it clear to drivers behind that they'll just have to wait. You'll get the occasional beeping horn, but you'll be safer.
8. Don't give the finger
Sure, it's tempting. But from personal experience I can tell you it's always the wrong response to a driver cutting you up or somehow annoying you. One time I had a white van reverse after me after I gave him the finger for cutting me up; another time I almost crashed into a barrier because an SUV turned left on me without signalling. The advice here's simple: don't ever give the finger. As well as losing any moral high-ground, you're putting yourself in danger.
9. Ignore the cycle lane if it looks dangerous
This is a controversial one and I'm sure some riders will disagree. If a cycle lane looks dangerous to you -- taking you onto the pavement and then ejecting you back on the road at a busy point, say -- then ignore the lane and stick to the road. If you do end up in an accident because you ignored the cycle lane, the legal waters are a bit muddy (see here) but safety should be your priority, so do what looks safest.
10. Get a helmet already
The number of helmet-free cyclists on London's roads continues to amaze me, and I pine for the day when wearing a helmet becomes a legal necessity. In the meantime, although some people (like Mayer Hillman) argue that helmets make you less safe, I strongly recommend you wear one. If it's my head and the concrete versus my helmet and the concrete, I know which I'll choose every time.
For more cycle safety tips, check out the London Cycle Campaign's Cycle Sense pages. You can sign up for London Freewheel on its official site.
at 7/26/2008 06:08:00 AM
Tags: Life