Huge gathering of Model Ts in Indiana marks centenary of iconic Ford
With a 28mph top speed, it is unlikely to be catching any criminals. 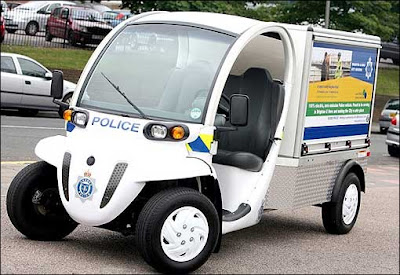 A real Gem: the Global Electric Motorcar is being trialled by Sussex Police
However, this electric police car can do 50 miles without being charged and could be the face of the future for community support officers.

Britain's latest police car may look like a golf buggy, but it is capable of doing 450 miles per gallon.

Made by Chrysler, the zero-emission all-electric Gem is being used by police in New York, Miami and Los Angeles but is now being tested by forces in this country.

The Gem - or Global Electric Motorcar - was unveiled in Brighton and is being trialled by Sussex Police for use by neighbourhood police teams, in an attempt cut down on pollution problems as officers patrol the streets.

advertisement
It has a plug socket like a kettle's in the nose of the front bonnet and can be plugged into any mains outlet to be charged.

The down side is the car can only go 50 miles before batteries need recharging while the top speed of 28mph means it is unlikely to catch many fleeing criminals or take part in any high-speed chases with a bicycle let alone a car.

But with diesel costing £6.50 per gallon, the same spent on electricity will run the fibre-glass car for 450 miles.

The Gem costs £12,500 and will be evaluated before Sussex Police decided whether to buy them.

Gem already offers a number of models in the US used by a number of government agencies as well as hotels, universities and medical campuses.