AUDI has added two new engine variants as part of an overall upgrade of its five-door A3 Sportback range in Australia.

The A3 Sportback gets a 1.4-litre TFSI direct-injection turbocharged petrol engine for the first time while the 2.0-litre diesel option is now a more powerful and economical direct-injection TDI unit.

Other changes for the 2009 model year include the availability for the first time in the A3 Sportback of Audi’s 7-speed S tronic dual-clutch transmission, which is now standard in the 1.6 and 1.4 TFSI models and is available as a $2700 option on the 1.8 TFSI (which comes standard with a six-speed manual). 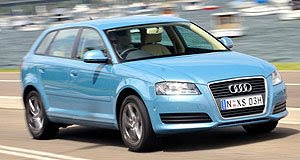 Minor exterior changes to the range include revised bonnet, grille and front and rear bumpers, redesigned tail-lights, LED side indicators integrated into the side mirrors (first seen two months ago with the launch of the high-performance S3 Sportback), new alloy wheel designs and four additional exterior colours.

Prices still start from $37,200 for the 1.6-litre (non-turbo) Attraction, which now has the seven-speed auto instead of the previous six-speed unit.

Fuel consumption is an impressive 5.8L/100 km and the 1.4 TFSI Attraction is priced at $39,950 with its standard 7-speed S tronic transmission.

Although there was a 2.0-litre turbo-diesel model in the superseded A3 Sportback range, the new direct-injection common-rail TDI gets a big lift in performance with a power output of 125kW (up from 103kW) and maximum torque of 350Nm (up from 320Nm) delivered from 1750rpm to 2500rpm.

At the same time, even using the same six-speed S tronic transmission, the advances in technology have reduced fuel consumption by five per cent to 5.7L/100km while carbon dioxide emissions have been reduced to just 149 grams per kilometre. And the price of the new A3 Sportback 2.0 TDI is $47,900, which is $600 less than the previous model.

As part of the 2009 model year upgrade, Audi Australia has extended the options list with the addition of magnetic ride, park assist (which also debuted on the S3 Sportback) and adaptive headlights with cornering light technology.

Park assist is priced at $1750 and works at speeds of up to 30km/h using ultrasonic sensors to detect if a parking spot is large enough. Once reverse gear is engaged, it then parks the car automatically in a single movement.

Magnetic ride was developed in Australia and uses magnetic particles inside the shock absorbers that enable the dampers to be continually adjusted electronically according to the road and driving conditions.

Audi first used this electronic suspension control system in the TT and R8 models and now offer it at $2400 on the A3 Sportback 1.8 TFSI, 2.0 TDI and 2.0 TFSI models.

Interior changes include additional chrome elements on the air vents and on the 3-spoke steering wheel, single-colour black dials and needles in the instrument cluster (similar to the S3 Sportback and TT models), new trim colours and a change-up display in the driver information system that now shows optimum gear changes.