If timing is everything, as the old saying goes, then Ford has all the talent of a hurricane the day of an outdoor wedding.

First, the headline. The 2010 Ford Fusion Hybrid scored a sizable improvement in fuel economy over the Toyota Camry hybrid. The Fusion, on sale in March, has been certified at 41 city/36 highway, compared with 33/34 for the Camry.

That is especially sweet for Ford. When Ford launched its Escape Hybrid SUV, it didn’t seem to get full credit for having the first hybrid SUV on the market because it used some of Toyota’s patented technology. Even though Ford developed the system, the false perception was created that the whole thing was copped from Toyota.

The fact was that Ford ended up using a few bits of Toyota technology that was patented. The truth is that it is hard to do a hybrid system today without running into some patents held by either GM or Toyota. Ford and Toyota have an agreement in place to cross-share, with Ford using a few pieces of Toyota’s hybrid technology, while Toyota is using a few bits of Ford’s direct-injection technology.

But it goes to show how much room there is for engineers at two different companies to take essentially the same technology and achieve different end results by creating their own unique systems. Not that Toyota, I’m thinking, couldn’t have achieved comparable numbers for the Camry. But after you take the battery and other hybrid controller bits and pieces and mate them to a unique engine, and then allow for differences in weight, tuning, features, wheel-base size, there is a lot of room for fuel economy variation.

Ford prioritized scoring the highest possible fuel economy number without compromising performance. Indeed, driving the Fusion Hybrid the last several days, I can attest that I did not miss any performance aspects as I got an average of 37 mpg in combined driving. A good deal of my driving was highway. In city, mileage was closer to 50 owing to the fact that you can go up to 47 mph without using any gas.

Ford introduced the Fusion Hybrid (along with the nearly identical Mercury Milan hybrid) at the LA Auto Show the same week that the Detroit-Three CEOs were testifying before Congress the first time asking for bailout loans. Ford CEO Alan Mulally mentioned the Fusion hybrid to lawmakers and media several times that week, but all the attention was on the private jet he flew to Washington, and his $22 million compensation last year.

Gas is between $1.50 and $1.70 in most of the country these days. That’s not ideal for selling hybrids, and Toyota has found out. That waiting list for Priuses has thinned out quite a bit since summer.
The EPA certification for the Fusion, which smokes the Camry on fuel economy, came out on December 23 when office parties were going on, end of year projects were being completed, pink-slips were going out and last minute shopping was being considered.

If the Fusion’s fuel economy bragging rights weren’t enough to sell the car come Spring, Ford has baked in a number of mid-cycle improvements to the Fusion including a better looking front end and an interior that is a light year better than the original Fusion. The car is seriously handsome now, with a sparkling interior. It is the interior with which Ford should have launched the car. But the original Fusion interior was not designed and approved under the design renaissance of global product chief Derrick Kuzak.

The only thing this car is missing to make a big green splash is a brand reputation for green fuel efficient cars, and, of course, timing.

If gas prices head North again in 2010, though, I’d say Ford is well situated to take advantage and generate some waiting lists of its own. Of course, by that time, GM will be closer to launching the Volt extended range electric, and will probably be sucking most of the oxygen out of the room at that time. 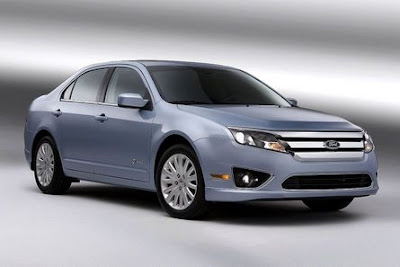