Over at the BMW Blog, they have handled to get hold of a copy of what is believed to be BMW’s 2009 product introduction roadmap. The Munich automaker will be setting up an extensive range of new production vehicles next year comprising a new Z4 roadster and hybrid versions of both the new 7-series sedan and the X6 “whatever it is.” Most amusingly, the roadmap shows that two different electrically-driven concepts will come out next year.

Earlier this year, BMW exposed the MINI E as the first product of its Project i, which is meant to establish urban electric vehicles. The second output of the project is anticipated to be the Concept eDrive. This time, instead of the MINI, either the 1 or 3 series will form the basis. Furthermore an electric drive not much else is known, but given the relative speed with which the MINI E was established, this will probably go a step beyond that first draft, perhaps using battery technology specifically created for automotive use. 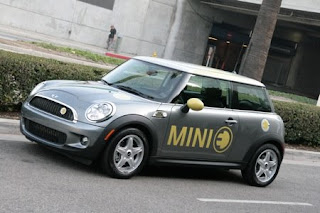 The second new EV is called by the Z Vision Concept. In BMW nomenclature, the Z models are all two seat roadsters and this should carry forward to the new concept. This smaller electric sports car is also considered to be based on the 1-series with a dual cockpit layout and no windshield. No word on which reveals will host the debuts of these cars but Geneva is likely to be one of them.
at 12/29/2008 03:42:00 AM
Tags: BMW electric vehicles, bmw project i, BmwZVision, Mini E
Newer Post Older Post Home