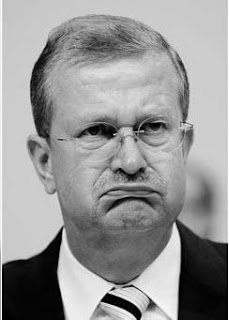 Wendelin Wiedeking, chief of a bank with attached sheet-metal fabrication named Porsche, used the quiet time between the holidays to sit down and pen a letter to all employees. He had to get it off his chest. Usually, this is the time for well wishes and brave forecasts. This time, it’s different. At least at Porsche. Even the most dopamine-saturated Porsche employee will be deeply depressed after reading Wiedekings new year letter. Sales of Valium and harder drugs, such as Schnapps, probably went through the roof in Zuffenhausen after the letter was opened. Automobilwoche (sub) obtained a copy of the inspirational message.

“Don’t let the high profitability of our company fool you. Dark clouds cover the skies. Due to the crisis in the financial markets, we are in a recession which we had not seen for many decades.” So far, so bad. Everybody who can read or watch TV knows that by now.

The missive continues with the usual yadda yadda of all auto makers being in a deep sales slump. Aber Achtung! Even Porsche, the company that could make more profits than sales, suddenly is not immune: “Despite being better prepared than most of the competition, we will not remain unscathed by the drops in demand.” Uh-oh.  “Reduction in demand” usually is a precursor for “reduction in jobs.” As Wiedeking is looking ahead, the wisdom of building a Cayenne becomes as clear as it possibly can get:


Every Porsche worker will need one, because “in front of us lies a rocky road, and we don’t know its distance.  Surviving the dry spell will demand our utmost dedication and attention.”  Get your Cayenne, top up, and hydrate up, boys!

In case people haven’t gotten it at this point, Wendy spells it out: “We will lower our production. We’d rather build one car less than one too many. ” Still don’t understand where he’s going? Ok, write that down: “There is need for serious belt tightening.”

Ah, wait, there is one optimistic sentence in Wendy’s letter: “With the launch of the Panamera we will surely succeed in stabilizing our sales in the coming year.”

According to the German newspaper Der Tagesspiegel, Wiedeking made (at today’s rate) $142m in 2008. Good reason for the German business daily Handelsblatt to pronounce Wiedeking the “best paid auto manager of the world.” Compared to Wendy, Mulally and Wagoner earn minimum wage. A little belt tightening should be good for the waistline.

But Wiedeking didn’t write the letter to himself. However, he wrote, well, at least he signed it all by himself. Automobilwoche found it worthy to note that the letter was signed by Wiedeking only, and not by the other members of the Porsche board.