Rolls Royce Motor Cars has seen its 2008 sales increase by 20 per cent. Last year the luxury car manufacturer retailed 1212 cars compared to 1010 the previous year. This marks the fifth consecutive annual sales increase since the company was launched in 2003. 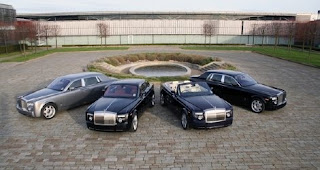 There was strong demand across the Phantom range. However the continued popularity of the four-door versions was evident with the Phantom saloon and Extended Wheelbase models accounting for more than half of all sales. Continued interest in the Phantom Drophead Coupé and, in particular, the introduction of the Phantom Coupé in the summer of 2008 saw Rolls-Royce attract new buyers, boosting retails to record levels.

“This is a tremendous result and particularly gratifying considering the challenging economic environment manufacturers faced in the second half of 2008,” said Tom Purves, Chief Executive Officer. “Once again much of this success lies with the highly skilled and dedicated workforce that we have at Goodwood.”

North America remained the biggest single market for Rolls-Royce in 2008, accounting for 38 per cent of sales. Exceptional performances were seen in Northern Europe and in the Middle East which grew by around 95 and 48 per cent respectively. The Asia Pacific region saw continued sales growth in markets such as Australia, China, India and Singapore.

Looking ahead, preparations are now fully underway to ready the company for the introduction of a brand new model series, currently named RR4, due later this year.