Toyota announced today that it will display the Toyota FT-EV concept at the 2009 Detroit Auto Show, January 11 – 25, hinting that it might offer an urban all-electric commuter vehicle in the next few years. The FT-EV concept shares its platform with the company’s minicar, the Toyota iQ.

Toyota introduced the gas-version of the iQ in Japan in November 2008, and plans to roll out the minicar to Europe this month. Plans for North America are undetermined. The iQ is larger than the quintessential minicar, the Smart Fortwo, but not by much. Its wheelbase is a little more than five inches longer, and on the whole, the car is only about a foot longer than the Smart—11.4 inches to be exact. The iQ is a four-passenger vehicle while the Smart only carries two.

The electric version on display at the Detroit Auto Show, the Toyota FT-EV concept, offers driving range of 50 miles, according to Toyota.

“Last summer’s four-dollar-a-gallon gasoline was no anomaly. It was a brief glimpse of our future,” said Irv Miller, group vice president of environmental and public affairs at Toyota. The company is expected to dabble with pure electric and smaller vehicles like the iQ, but conventional gas-electric hybrids, like the Prius, are considered Toyota’s long-term core powertrain technology. 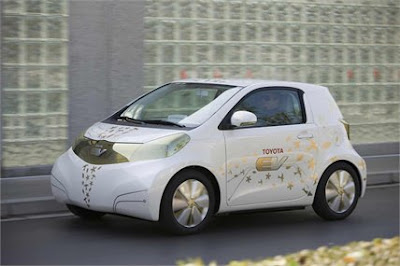 Last year, Toyota announced that it planned to sell one million gas-electric hybrids per year sometime during the early 2010s. To accomplish this, Toyota is expected to launch as many as 10 new hybrid models in the next few years. The company has not made any firm commitments to bring an electric car to market.
at 1/11/2009 05:42:00 AM
Tags: Toyota FT-EV
Newer Post Older Post Home