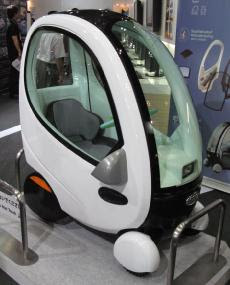 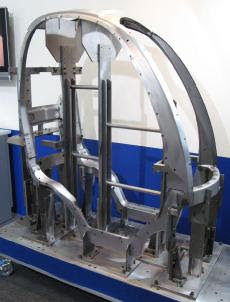 Topia Corp, a company engaged in designing and prototyping automobiles, prototyped a single-seater electric vehicle "HUVO," which weighs only about 150kg (330 lb).

The vehicle was exhibited at the booth of Marubeni Information Systems Co Ltd in the 19th Design Engineering & Manufacturing Solutions Expo (DMS), which is an IT solution exhibition for manufacturers and runs from June 25-27, 2008, at Tokyo Big Sight.

The HUVO was developed by using Topia's proprietary design and production technologies, the company said.

If a vehicle of the same size as HUVO is made with existing technologies, it would weigh about 300kg, said Hideki Sasaki, president & CEO of Topia.

The body frame is made of high-tensile steel plate, the doors on both sides and the back panel are made of aluminum alloy, the roof is made of carbon fiber reinforced plastic (CFRP), the windshield is made of polycarbonate, and the interior parts and the wheel covers are made of ABS resin.

For pressed parts such as the body frame and the doors, Topia not only designed and manufactured the press molds but also pressed and welded the parts in house. Using the press simulation and 3D measurement, the company enabled to form high-tensile steel plates into parts with high precision.

After the press molding, those parts are trimmed by 3D laser processing, and the body-in-white is manufactured by MIG welding, spot welding and self pierce riveting.

ABS resin parts were manufactured by Stratasys Inc's RP system. Topia has reportedly introduced two units of this RP system (including a 3D printer), and selectively used them according to the part size and the required precision. Topia also decided to introduce "FDM 900mc," Stratasys' large RP system released in April 2008, and will be the first FDM 900mc user in Japan, the company said.