Hot hatch fans rejoice – the Golf GTI is getting a little brother!
VW has an all-new Polo on the way in 2009, and is readying the wildest, fastest and sportiest version ever to top the range.

Following in the footsteps of the MkV Golf GTI – which showed VW could still produce amazing performance cars when it launched in 2004 – the Polo GTI looks set to be a sales smash hit.

As you can see, the flagship won’t be short of visual aggression. All the classic GTI design cues are there, from the piano black grille highlighted in red to the GTI badging and deep air intakes.

Neat touches include muscular flared arches, filled by gorgeous alloys. The look is finished off by a subtle roof spoiler and bodykit – and the result is by far the most
distinctive Polo ever made.

Inside, the cabin will see some dramatic leaps in quality, with similar soft-touch plastics to those in the latest MkVI Golf (tested on Page 40). But what will really make the newcomer stand out will be its detailing – which includes figure-hugging sports seats, red piping and racy aluminium pedals.

The next Polo will be similar in size to the outgoing machine. But as it shares the PQ25 small car platform that underpins the latest SEAT Ibiza, more space has been freed up inside. Using this chassis as a base, company engineers will also add stiffer springs and thicker anti-roll bars, plus sophisticated traction and stability control systems.

When it was launched, the MkV Golf GTI set the standard for modern performance VWs, and the Polo GTI aims to have a similar impact. It will combine accurate steering and limited body roll with a compliant ride. Completing the package is a set of upgraded brakes.

However, the Polo’s hottest asset will be its engine: a 1.4-litre supercharged and
turbocharged four-cylinder TSI, which will grace the Ibiza Cupra early in 2009.
This produces 178bhp and 250Nm of torque in the GTI, and gives a 0-60mph time of around seven seconds and a 140mph top speed.

What will make the car fun to drive will be the way its power is delivered. The combination of turbo and supercharging means there will be a broad spread of torque at low revs, with muscular urge continuing all the way to the red line. The engine’s small capacity will also translate into strong economy and CO2 emissions. Figures of 40mpg and less than 150g/km are expected.
As with the Cupra, the GTI gets a six-speed manual box as standard, with a fast-shifting seven-ratio DSG box an option.

While the new Polo is set to make its world debut at the Frankfurt Motor Show in September, the GTI won’t be seen until early 2010. A price of around £15,500 is likely. 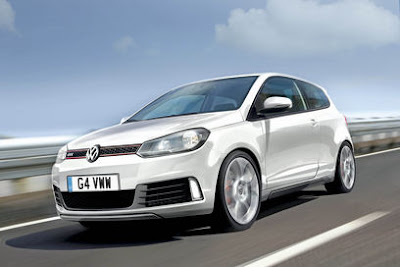