It's been a pipe dream for 30 years but now the world's first fully available flying car is set to hit the roads next year.

Ever since the Back to the Future movies lit up our screens in the 80s, designers have dreamt of an automobile that could take to the skies at the push of a button.
And now qualified pilots can order their very own Terrafugia Transition 'roadable' plane for just  ?127,000, with delivery planned for late next year. 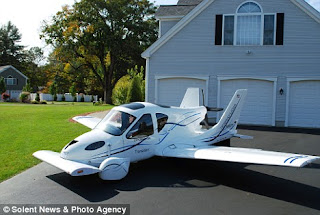 The Terrafugia Transition 'roadable' plane can be kept at home, with wings folded up, in your garage
The 'light-sport airplane' promises to bring more 'flexibility and convenience to your flying'.

The plane, which has fold-out wings that span 27.5ft when extended, has an airborne range of 460 miles and can cruise at 115mph.

Back on terra firma, it is capable of travelling at 'highway speeds' in car mode.
Fuelling the 19ft long plane couldn't be simpler - you just drive it into a petrol station and fill it up with unleaded. 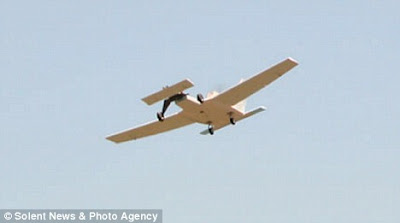 Action! The 19-foot-long plane has an airborne range of 460 miles and can cruise at 115mph
A spokeswoman for designers Terrafugia, based in Woburn, Massachusetts, USA, said: ‘You can keep your Transition in your garage.

‘Then you simply drive to your local airport, fly up to 460 miles, land, convert and drive directly to your destination.

‘You'll always be ready to drive or fly.’


A series of simple commands made from the cockpit convert the white craft from plane to car and vice versa.

But the wings only fold out if the correct key code is entered by someone with a pilot's licence. 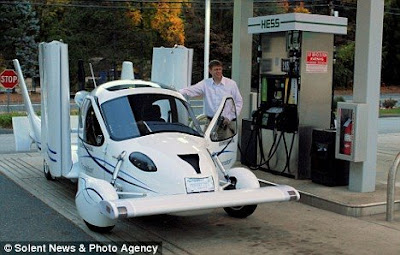 Simple: The 'roadable' plane can be filled up at the local petrol station with unleaded
Unlike many 'flying car' concepts which use thrusters to take off vertically, the Transition needs a short runway to take to the air.

‘You can simply divert and continue on the ground until the weather clears.’
You can secure your very own Transition aeroplane by simply paying a deposit of ?6,500. 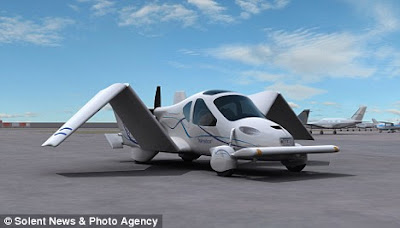 Ease: Pilots will be able to drive to the local airport, take off and then fly for up to 460 miles (740 km)

The firm's website, 'Terrafugia.com', says of prospective owners: ‘Your deposit doesn't just reserve your very own roadable airplane, it gives us proof that today's pilot community is ready for this dream to finally become reality.

‘There's no risk to you - only the chance to be the first at your home field to unfold your wings and fly into the future.