An electric car costing only $25,000 could be on sale in Australia within three years.

US media is reporting the diminutive Toyota FT-EV electric car could wear an affordable price tag of about US$20,000 (about $25,000). 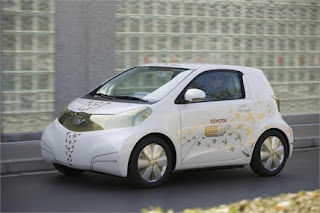 The FT-EV electric vehicle will see Toyota join the growing number of manufacturers who in the early years of the next decade will offer vehicles that run on electricity.

The FT-EV is based on Toyota’s iQ micro-car that landed in European and Japanese showrooms in 2008, though swaps that car’s 1.0-litre petrol engine for a 45kW electric motor powered by a lithium-ion battery pack.

Toyota says the three-metre-long, four-seater FT-EV has a cruising range of 80km and a targeted top speed of 112km/h.

It takes between 2.5 and 7.5 hours to recharge the Toyota FT-EV electric car, depending on the voltage of the power supply.

Toyota says the FT-EV will broaden its range of alternative-fuel vehicles as the world faces dwindling oil supplies, and will be aimed at city residents who would use the battery-electric car to commute between home and work, or to drive to other forms of public transport such as railway stations.

“It was a brief glimpse of our future. We must address the inevitability of peak oil [when the world’s oil supply starts a permanent decline] by developing vehicles powered by alternatives to liquid-oil fuel, as well as new concepts, like the iQ, that are lighter in weight and smaller in size. This kind of vehicle, electrified or not, is where our industry must focus its creativity.”

Toyota says its petrol-electric hybrid vehicles – such as the third-generation Toyota Prius hybrid car also revealed at the 2009 Detroit motor show – will continue to be at the centre of the company’s long-term sustainable motoring program.

Toyota will introduce 10 new petrol-electric hybrid models by the early 2010s in various markets as it targets one-million hybrid sales per year.

Toyota also used the Detroit show to announce it was fast-forwarding its plug-in hybrid program from 2010 to 2009.

Towards the end of 2009, Toyota will deliver 500 Prius plug-in hybrids to global fleet-lease customers as part of a mass-production feasibility study.

The Prius plug-in hybrid (PHV) is different to the petrol-electric Prius that has become the world’s best-selling hybrid. The Prius PHV can only recharge its lithium-ion battery pack through a power outlet, whereas the current Prius recharges its nickel-metal hydride battery via its 1.5-litre petrol engine.